Canada helicopter sex chat heard by Winnipeg public –
Canadian police have apologised after an explicit conversation was inadvertently broadcast from one of its helicopters. Whilst on patrol over Winnipeg, the chopper’s crew accidentally turned on its loudspeaker allowing members of the public below to hear them. Those listening say they heard pilots swearing and discussing oral sex. The officers were unaware that the loudspeaker was on due to the noise from the helicopter’s engine. Winnipeg Police Service say some of the “conversation was inappropriate” and have promised an internal review. [BBC]

5 Seconds of Summer fans go wild for ‘Doge Family’ hashtag after band change their Twitter profiles –
5SOS have changed their Twitter names and profile and the most bizarre hashtag is now trending. Fans have been tweeting #DogeFamily after the stars put up a photograph of a dog as their main images and changed their names, leaving us all asking: “WHAT IS GOING ON?!?” Well, we did some digging and found that ‘Doge’ is a internet meme based upon pictures of a Shiba Inus, and a slang word for dog. [Daily Mirror] See Top Twitter Trends below. 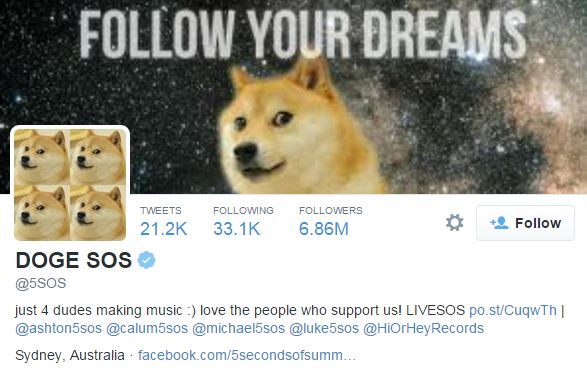 An end to email shame? Gmail’s ‘Undo Send’ comes to the masses –
“Today we’re adding ‘Undo Send’ as a formal setting in Gmail on the web,”explained Google in a blog post as the change went live. The feature, which can prevent massive social embarrassment and help avoid long chats with the HR department about what you just mistakenly sent to a colleague, is to be a standard part of Google’s webmail. It can be turned on from within Gmail’s settings menu and enables people to set a “cancellation period” of five, 10, 20 or 30 seconds after sending any email, during which they can call it back. The feature has been available in Gmail’s experimental Labs settings for some time, and was recently added to the company’s Inbox mobile email app – so many of Gmail’s more tech-savvy users will have set it up already. [The Guardian]

Reddit celebrates its 10th birthday with a ton of wacky stats –
It’s been 10 years since Reddit first launched – basically an eternity in Web time – and it’s celebrating its birthday by looking back at its history, as well as some statistics on where the platform is today. In the ten years since its inception, Reddit has garnered over 16 billion upvotes, compared to ‘just’ 2.6 billion downvotes. It’s kind of nice to know that in a platform often infamous for its trolls, more feedback has been positive than negative. There have also been 190 millions posts, 64 percent of which are links. On these posts, there have been 1.7 billion comments, of which 0.36 percent have mentioned cats. That’s over 6 million cat comments. [The Next Web] See List of the Day