Best photobomb ever? Seagull steals the show from Red Arrows display team –
An image that shows the latest addition to the world famous Red Arrows is a seagull has become an Internet hit. The amazing moment was captured by first year photography student Jade Coxon,18, as she took pictures at the Llandudno Air Show on 23 May. And, since posting the stunning snap online on Sunday, Jade is over the moon to have got more than 1 million views. The crisp pic clearly shows eight of the Red Arrows in tight formation trailing their famous vapour. But then where the ninth plane should be there is an intrepid seagull holding the formation in place and, amazingly, with his own vapour trail. [Daily Telegraph] 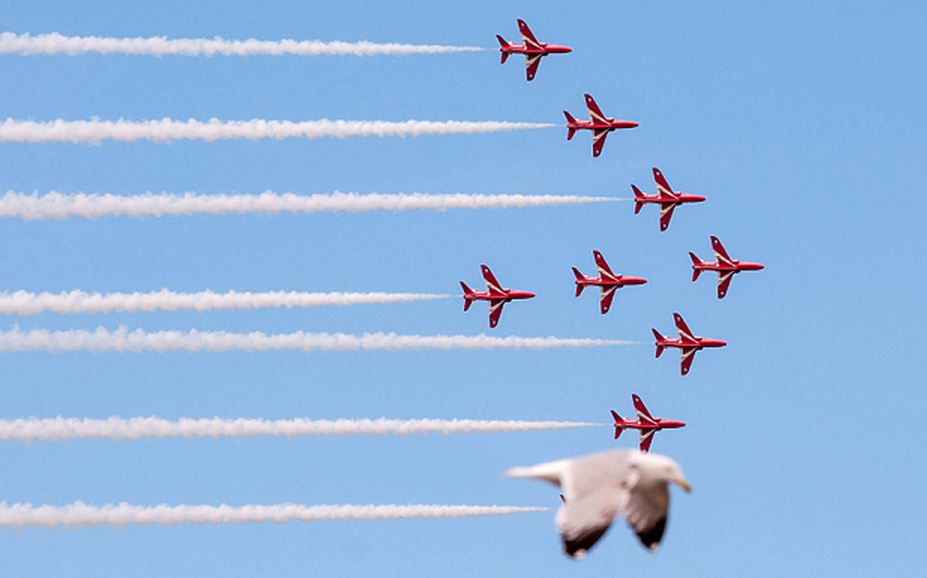 Taylor Swift enters Forbes 100 most powerful women list –
The 25 year old singer and songwriter has become the youngest woman ever to be included on the Forbes list of The World’s 100 Most Powerful Women.
She’s included at number 64 in the list released on Tuesday because, Forbes says, she ‘has not only broken record sales and captivated the world with her fantastically honest lyrics, but she has proven herself as an impressive businesswoman.’ [Daily Mail] See List of the Day

The Charlie Charlie Challenge – what is the spooky craze? –
A strange new game is taking over Twitter, fuelled by speculation that its players can connect with a dead Mexican spirit known as Charlie. The Charlie Charlie Challenge has been played by thousands of young people after a number of videos purported to show supernatural goings-on. The game entails placing two pencils on a piece of paper in the shape of the cross with the words ‘yes’ and ‘no’. Participants then repeat the phrase “Charlie, Charlie can we play?” in order to connect with the demon. If Charlie is there the pencils will move to indicate his answer. [Daily Telegraph] See Top Twitter Trends 25 May 2015

Are You Consuming Your Coffee Correctly?

Forbes Magazine 100 Most Powerful Women in the World 2015 [Forbes]