Gymnast Sophina DeJesus’s hip-hop routine wows the internet –
Video of an American student gymnast has gone viral after she threw in some hip-hop moves during a university competition. Sophina DeJesus’s floor routine has been watched millions of times online. The UCLA, University of California, Los Angeles, undergraduate told Pac-12 Sports Report she had “no clue” it would get such a big reaction. “I wanted to think of something to end my senior year with a bang,” she said. Sophina was awarded 9.925 for her routine, despite the crowds cheering for the judges to give her a perfect 10. [BBC Newsbeat] See Video of the Day

Einstein’s gravitational waves found at last –
One hundred years after Albert Einstein predicted the existence of gravitational waves, scientists have finally spotted these elusive ripples in space-time. In a highly anticipated announcement, physicists with the Advanced Laser Interferometer Gravitational-Wave Observatory (LIGO) revealed on 11 February that their twin detectors have heard the gravitational ‘ringing’ produced by the collision of two black holes about 400 megaparsecs (1.3 billion light-years) from Earth.“Ladies and gentlemen, we have detected gravitational waves,” David Reitze, the executive director of the LIGO Laboratory, said at a Washington DC press conference. “We did it!” One black hole was about 36 times the mass of the Sun, and the other was about 29 solar masses. As they spiralled inexorably into one another, they merged into a single, more-massive gravitational sink in space-time that weighed 62 solar masses, the LIGO team estimates. [Nature] See Video of the Day 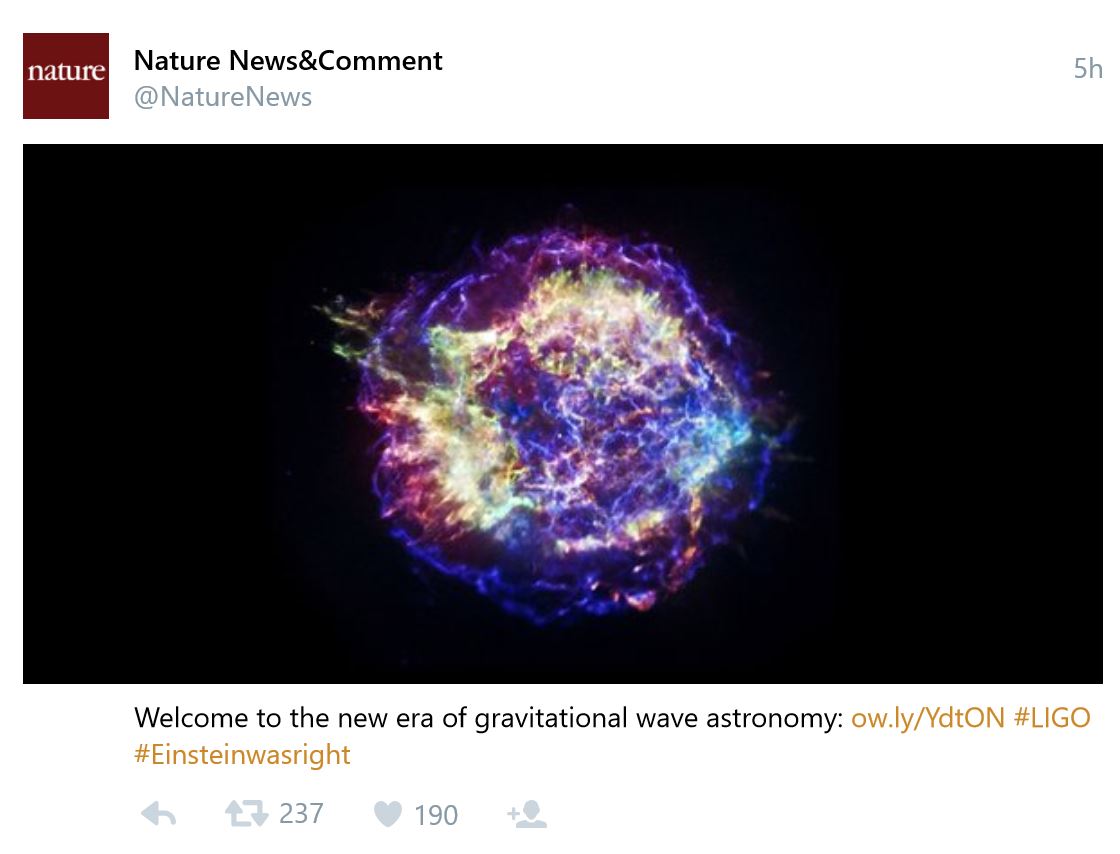 Star Wars prosecuted over Harrison Ford injury –
The production company behind Star Wars: The Force Awakens is being prosecuted over the incident in which Harrison Ford broke his leg. The actor was struck by a hydraulic metal door on the Pinewood set of the Millennium Falcon in June 2014. The Health And Safety Executive has brought four criminal charges against Foodles Production (UK) Ltd – a subsidiary of Disney. Foodles Production said it was “disappointed” by the HSE’s decision. Following the incident, Ford was airlifted to hospital for surgery. [BBC] Harrison Ford received more than £23 million for his role in the new Star Wars blockbuster and last year crashed his light aircraft for a third time.