Facebook sets user record as more than 1bn people log on in single day –
Facebook has revealed that more than 1bn people used the site on Monday – the first time the social network has hit the milestone. Mark Zuckerberg, who founded the company in 2004 while studying at Harvard, said he felt “proud” that one-in-seven people on Earth logged on to the website during the day. The 31-year-old wrote in a post on Facebook: 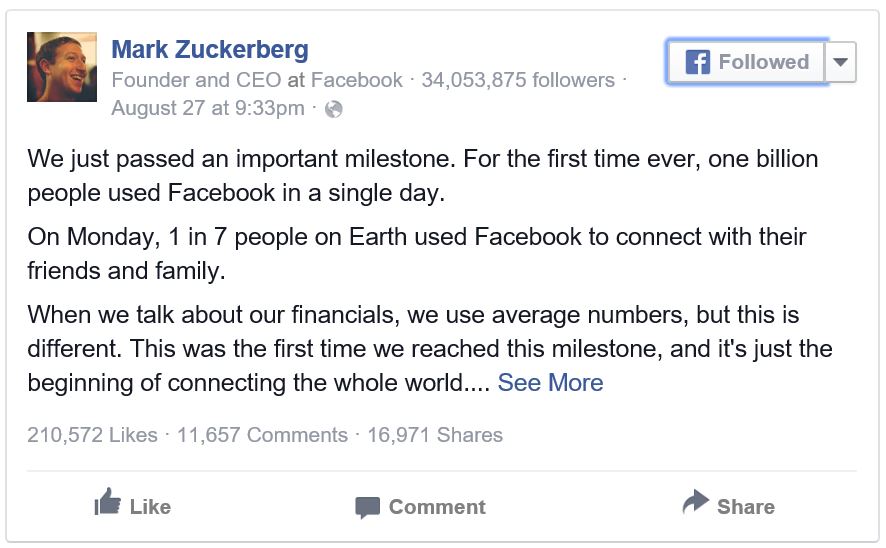 Mark Zukerberg tweet
Although Mr Zuckerberg did not specify what had caused the rise in the number of users, the website has consistently attracted more followers. Last month Mr Zuckerberg revealed Facebook had 1.49bn monthly active users, up 13pc from a year earlier. [Daily Telegraph]

LEVEL from joe pease on Vimeo.

The top ten most unexpected words added to the online Oxford dictionary [according to the Daily Telegraph]
1. manspreading (noun): the practice whereby a man, especially one travelling on public transport, adopts a sitting position with his legs wide apart, in such a way as to encroach on an adjacent seat or seat

4. fat-shame (verb): cause (someone judged to be fat or overweight) to feel humiliated by making mocking or critical comments about their size

5. Brexit (noun): a term for the potential or hypothetical departure of the United Kingdom from the European Union

7. cakeage (noun): a charge made by a restaurant for serving a cake they have not supplied themselves

8. fatberg (noun): a very large mass of solid waste in a sewerage system, consisting especially of congealed fat and personal hygiene products that have been flushed down toilets

9. Grexit (noun): a term for the potential withdrawal of Greece from the eurozone (the economic region formed by those countries in the European Union that use the euro as their national currency)

10. hangry (adjective): bad-tempered or irritable as a result of hunger