Wentworth golf club asks for six-figure membership fee –
One of the UK’s most exclusive golf clubs is to start charging £125,000 to new joiners. Wentworth, which was bought by the Beijing-based Reignwood Group in September 2014, has told existing members they must stump up £100,000. Annual fees on top of that are to rise from £8,000 to £16,000. James Wyatt said he and other members faced having to pay “an enormous amount”. The Surrey golf club said membership pricing “is a private club matter”. [BBC]

Working Enigma machine fetches world record price at New York auction –
An extremely rare and fully operational Nazi Enigma machine from Second World War has sold for $365,000 in New York, setting a new record at auction, Bonhams said on Thursday. The M4 machine, which was built between 1943 and 1945, is one of around 150 to have survived from an estimated 1,500 that were built as Nazi Germany fought to fend off the Allies. A spokeswoman for Bonhams said the $365,000 (£237,000) sale price set a new world record for an Enigma machine sold at auction. The purchaser at Wednesday’s sale was identified only as a private collector. [Daily Telegraph] 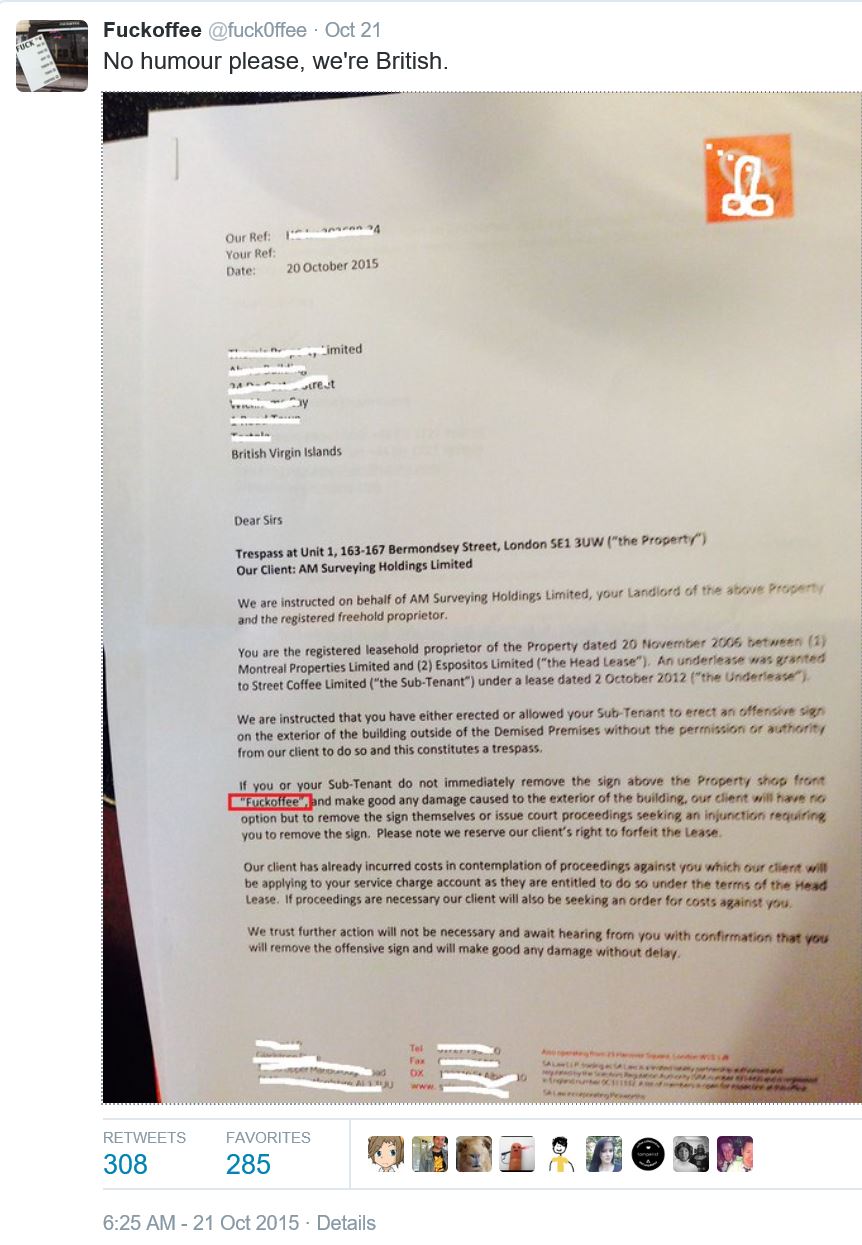 The letter read: “We are instructed that you have either erected or allowed your sub-tenant to erect an offensive sign on the exterior of the buliding… without the permission or authority from our client to do so and this constitutes a trespass.” According to the letter, the Bermondsey Street coffeeshop could face legal proceedings or the forfeiture of its lease if it does not remove the sign. It will also have to cover the costs of the legal steps taken so far. [Daily Telegraph]

Peta’s NSFW Super Bowl 50 advert banned by TV execs –
An advert produced by People for the Ethical Treatment of Animals, intended to air during the Super Bowl next month, has been barred from viewers’ screens by TV executives. The advert, depicting two couples having sex, is intended to encourage people to adopt veganism. “Vegans last longer. See the side by side proof here,” reads the supporting text, as the vegan and meat-eating couples are shown going at it hammer-and-tongs. The meat-eaters’ love-making is over within moments of the advert beginning – while the vegans keep going until the end. PETA says it planned for the clip to be aired during the Super Bowl, where advertisers pay millions of dollars to target US TV’s largest, most receptive audience of the year. “We did try to submit the ad last fall but we didn’t get a response from the executives at CBS,” a spokesman for the animal rights organisation said. However, since news broke that the advert was banned it’s received a huge amount of attention, winning 1.1 million YouTube views in just three days. [Daily Telegraph] See Video of the Day