Australia unveils 35-year plan to save Great Barrier Reef –
Australia has released a long-term blueprint to try to stem the decline of the Great Barrier Reef following warnings that the famous 1,500-mile stretch of delicate coral reefs could be wiped out by extreme weather and pollution. The 35-year plan is designed to improve the poor water quality and prevent the loss of coral cover in the area, which received a world heritage listing in 1981 and is regularly listed as one of the seven wonders of the natural world. But the area’s deterioration has worried scientists and led to warnings by the United Nations heritage body that it may downgrade the reef’s heritage status to “in danger”. [Daily Telegraph]

Photoshop disaster over a disappearing umbrella in Burma –
Ridicule is raining down on government spin doctors in Burma after they released a publicity shot of a top government minister in which an umbrella had been photoshopped out but a telling shadow gave away their dastardly intervention. The picture is question showed Su Su Hlaing, the country’s deputy minister, disembarking from a plane on Tuesday afternoon at Kaw Thaung airport in the country’s south. It was posted on the Ministry of Information’s official Facebook page in an apparent attempt to boost the minister’s profile. However, internet users almost immediately spotted a glaring mistake. An umbrella-shaped shadow around the minister’s toes suggested she had been standing in the shade of a parasol, yet there was no parasol to be seen in the photograph. The reason for the deletion of an apparently harmless umbrella was not immediately clear. However, the most likely explanation was that a man shielding a woman with his umbrella was something “considered embarrassing for the former in male-dominated Burmese culture,” the The Irrawaddy website speculated. [Daily Telegraph] 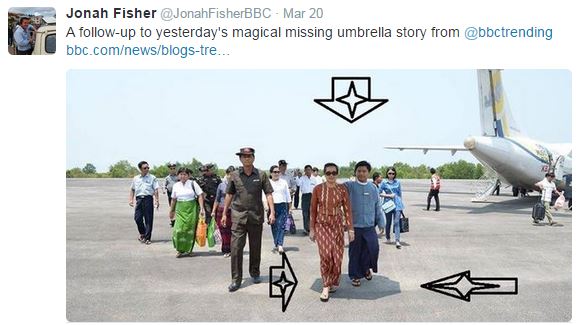 Six Nations 2015: Ireland title glory delights coach Joe Schmidt –
Ireland coach Joe Schmidt said he is “delighted and relieved” after his side retained the Six Nations title. A 40-10 win over Scotland gave Ireland the title on points difference ahead of England and Wales on a thrilling final day of the championship. Wales briefly led the Six Nations standings after hammering Italy 60-21 in Rome, resulting in Ireland needing to defeat the Scots by 21 points to go top. England required a 26-point winning margin over France to deny the Irish back-to-back titles for the first time since 1949, but they came up just short in a 55-35 victory to complete a dramatic triple-bill of action. See List of the Day. [BBC]