Taiwan Water Park Blast Leaves Hundreds Injured –
Hundreds of people were injured at a water park in Taiwan on Saturday when a cloud of colored powder ignited in the air over a crowd during an event, erupting into a huge fireball. No deaths were reported, but at least 516 people were injured, 194 seriously, including eight with life-threatening injuries, the island’s official Central News Agency reported. The injured, many suffering burns, were overwhelmingly young, in their 20s or younger, according to a roster posted on the news agency’s website. Color Play Asia bills itself as Asia’s biggest color party, an event where people dance to music while spraying each other with colored powder. A promotional video for the event on its Facebook page shows employees on a stage blasting colored powder onto the crowd. [NY Times]

Thousands attend London Pride march –
Thousands of people have taken to the streets of London for the annual Pride parade. More than 250 groups took part in the parade, which started in Baker Street at 13:00 BST. Police said there was extra security on the route following terror attacks in France, Tunisia and Kuwait on Friday. The United States flag joined Ireland and Mozambique’s at the front of the march, recognising recent gay rights progress in the three countries. [BBC] See List of the Day below 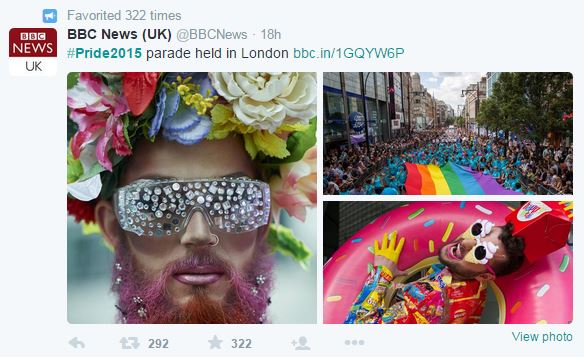 2 Charged in Confederate Flag Removal at South Carolina Capitol –
A protester climbed a 30-foot flagpole and removed the Confederate battle flag from its perch outside the South Carolina State House early Saturday, before she was arrested and the flag replaced, the police said. The protester, an African-American woman, was nearly halfway up the pole when a State Capitol police officer on routine patrol ordered her to come down. The authorities said the woman, who was wearing climbing gear, had ignored the command. She continued her climb to the top of the flagpole and unhooked and removed the flag before descending. An officer from the Bureau of Protective Services arrested her and a white male who had aided her. [NY Times] See Video of the Day