Clinton logo goes rainbow for same-sex marriage arguments –
Hillary Clinton on Tuesday changed the colors of her presidential campaign logo Tuesday on social media to the rainbow colors symbolizing the gay rights movement, less than an hour before the Supreme Court on Tuesday was set to hear oral arguments on same-sex marriage. Clinton, who is now seeking the Democratic presidential nomination, announced in 2013 her support for the right of same-sex couples to get married after leaving her post as Secretary of State. Clinton’s logo changed on her Facebook and Twitter pages Tuesday morning shortly before 9 a.m. Facebook pages for individual state branches of the Clinton campaign also changed their logos, though the main logo on HillaryClinton.com, remained the usual red and blue logo. [CNN] The hashtag #SCOTUS relating to the court case trended on Twitter. 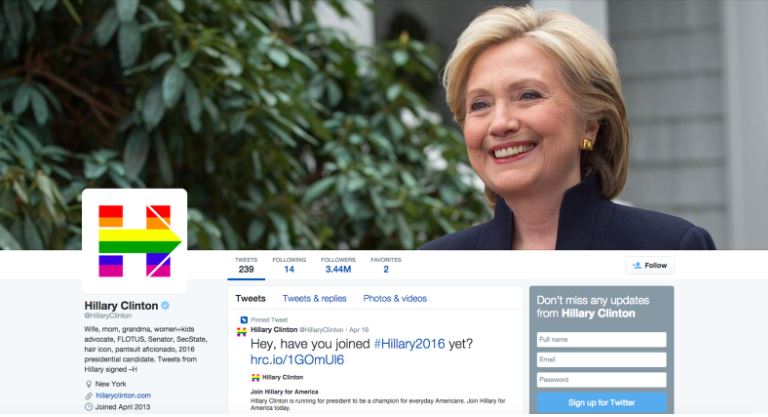 Baltimore police enforce curfew –
Police fired gas to enforce a curfew on the streets of Baltimore, a night after violence and arson rocked the city. After an evening of largely peaceful protests, a few hundred people defied the (local time)deadline of 22:00. But in the face of thousands of troops on the city streets, the remaining crowds later dispersed and police said the curfew was working. The protests have gone on daily since the death of Freddie Gray in police custody on 19 April. [BBC] (See Top Twitter Trends)

Sam Smith cancels Australian tour and Logie Awards show –
Sam Smith has been forced to pull out of his Australian tour due to bleeding on his vocal cords. The singer is just half way through an eight-date tour. He was also due to perform at the TV Week Logies, the annual Australian television industry awards. Writing on the tour website, Sam said having to cancel the tour “killed” him, but that he was on doctor’s orders to rest.

And the 10 Newest Victoria’s Secret Angels Are…

KATE GRIGORIEVA is an accomplished ballroom dancer. She graduated from art school and received her Bachelor’s Degree in Marketing before starting her modeling career.

TAYLOR HILL was scouted at a horse ranch in Colorado. She likes new music, reading, snowboarding and practicing yoga.

MARTHA HUNT was discovered in her home state of North Carolina at a modeling competition. She likes to cook and stays active with surfing and dancing.

JAC JAGACIAK was discovered during a casting at a shopping mall in her hometown of Puszczykowo. She comes from an athletic family, and trained in track and field since childhood. She enjoys playing sports and cooking.

STELLA MAXWELL has lived all over the world. She was discovered by a New Zealand agent, loves racket sports, hiking and travel.

LAIS RIBEIRO stays active with boxing, volleyball and soccer. She also has a passion for salsa dancing.

SARA SAMPAIO has won the Portuguese “Best Female Model” Golden Globe multiple times. She is a brown belt in karate, plays the violin, and loves to surf.

ROMEE STRIJD has a passion for interior design and cooking. She stays fit with running and boxing.

JASMINE TOOKES practiced gymnastics for 14 years and played high school volleyball. She is a self-described “foodie” who loves trying new and exotic meals.