Royal Shakespeare Company reveals its high-tech tips: carrots, cereal and tea bags –
The Royal Shakespeare Company is to open up its archives for the first time, sharing the behind-the-scenes secrets that have made their most accomplished productions. Anyone hoping to hear the highest-tech tricks of the trade, however, may be in for a surprise, as they disclose techniques even a schoolboy could master. The RSC’s first permanent exhibition of its own archives will show visitors how the company uses carrot sticks, rice crispies, and glue to pull off specific special effects. It will also how it uses tea bags and water to age the look of ordinary paper to make it appear Elizabethan: a trick used by schools up and down the land. The visitor attraction, called The Play’s The Thing, will open in June 2016, making it the RSC’s first exhibition devoted to the making of Shakespeare plays. It will be part of the restoration of the Swan Wing, built in 1879 and the oldest part of the Stratford-Upon-Avon theatre. [Daily Telegraph] 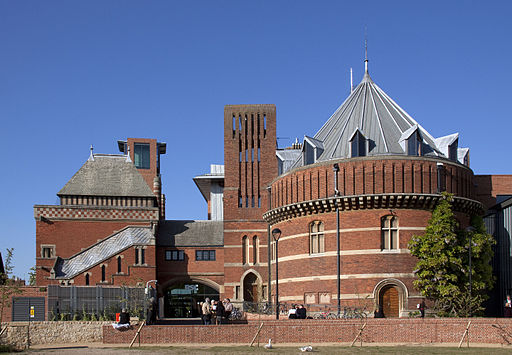 Leftfield “Head and Shoulders” from Ewan Jones Morris on Vimeo.

34. Chewing something can partially excise earworms – songs that stick in the mind.

Find out more (the Times)

37. Larry King tweets by calling a dedicated voicemail, which is listened to by an assistant who then transcribes his thought to Twitter.

39. The world’s favourite colour is blue.

40. Radiohead’s Thom Yorke appears on the front of an Iranian self-help book about marital and sex problems.

41. Tom Cruise advised Nasa on how to design their website.

Find out more (The Local)

44. The chances of a successful bank robbery are higher in the morning – but it’s also among the least lucrative crimes.

46. Chinese authorities consider the phrase “your mum” too coarse for the internet.

47. There are only three non-gentrifying neighbourhoods in New York City.

48. Reddit has a very detailed 9,000-word guide to the dos and don’ts of giving away Game of Thrones spoilers.

49. Oliver Cromwell supposedly called the Magna Carta the “Magna Farta” – he didn’t like it.

50. Most kangaroos are left-handed.

51. Marvel Comics stipulates that Peter Parker must be white and straight but Spiderman can be of any ethnicity or sexual orientation.

53. Heaven exists but hell does not, according to the theology of Sepp Blatter.

56. Playing Tetris for 12 minutes the day after a traumatic event can reduce flashbacks.

57. There are four main personality types into which people can be categorised when drunk: “Mary Poppins”, “Hemingway”, “Nutty Professor” and “Mr Hyde”.

Find out more (the Drinks Business)

58. Minions are all male because their creator believed they were too stupid to be female.

Find out more (The Wrap)

59. Nando’s is one of the biggest buyers of contemporary South African art.

60. In Ohio, it’s illegal to disrobe in front of a man’s portrait.

61. A UK court can determine how short your shorts should be.

62. Butt-dials aren’t considered private conversations in the US.

Find out more (The Times)

65. Reindeer migration is a major live television event in Norway.

66. Real Paleolithic people, contrary to some of the followers of the fashionable modern diet named after them, appear to have eaten plenty of carbohydrates.