Parking attendant ‘mistakenly gives away’ Grandmaster Flash’s car –
Hip-hop pioneer says he returned to garage to find his customised Dodge Charger had been given to someone “dressed like him”. When you leave your customised muscle car with a valet parking service in New York, you assume it is in safe hands.Particularly if you are a hip-hop superstar. But when Grandmaster Flash returned to the garage in Manhattan where he had left his Dodge Charger for two hours he was told by the attendant that his “whip” – slang for souped-up car – had been given to someone else. To make matters worse, he had left thousands of dollars of vintage vinyl in the car. [Daily Telegraph]

Has Kim Kardashian just fixed Twitter? –
Reality TV star wants to be able to edit misspelled tweets and Twitter co-founder says ‘great idea’. It is easily one of the most annoying things about Twitter: the inability to edit tweets that contain mistakes, spelling errors or just came out sounding a bit wrong. Instead, Twitter users have the delete the tweet, and repost a new version, which leads to all kinds of problems if the earlier tweet had been retweeted, and on it goes. But hopefully not for long. Enter Kim Kardashian, the reality TV star and unofficial queen of Twitter, who uses the site daily to communicate with her 33.8 million followers and promote herself. On Friday, Kardashian turned her attention to the workings of the site, asking why it wasn’t possible to simply edit tweets. Not long afterwards, she got a reply from Twitter co-founder Jack Dorsey, which suggests a fix for the problem isn’t far off. [Daily Telegraph] 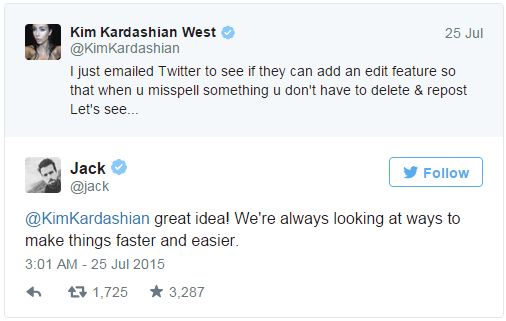