Fifa’s Sepp Blatter resigns Fifa presidency and is ‘under investigation in US’ –
Fifa president Sepp Blatter is being investigated by US officials as part of their inquiry into corruption at the world football body, US media say.
The news came hours after Mr Blatter announced that he was stepping down from his role. US prosecutors launched a criminal inquiry last week, with seven Fifa officials arrested in Switzerland, part of a group of 14 people indicted. Two days after the arrests, Mr Blatter was re-elected president of Fifa. However, he said on Tuesday that it appeared the mandate he had been given “does not seem to be supported by everyone in the world”. [BBC]

Kim Kardashian catches fire at awards dinner –
Kim Kardashian has already got enough on her plate, what with her expecting her second child and all. So it probably didn’t help when her first outing since announcing her happy news ended in flames. Not actual Kim Kardashian, but her dress at the CFDA Awards. The feathers on her see-through embellished dress brushed against a candle, and she needed some A-list emergency help to put her out. Luckily Pharrell (sans big hat) and his wife Helen were nearby to “jump” on her to pat Kim out. [BBC] See List of the Day 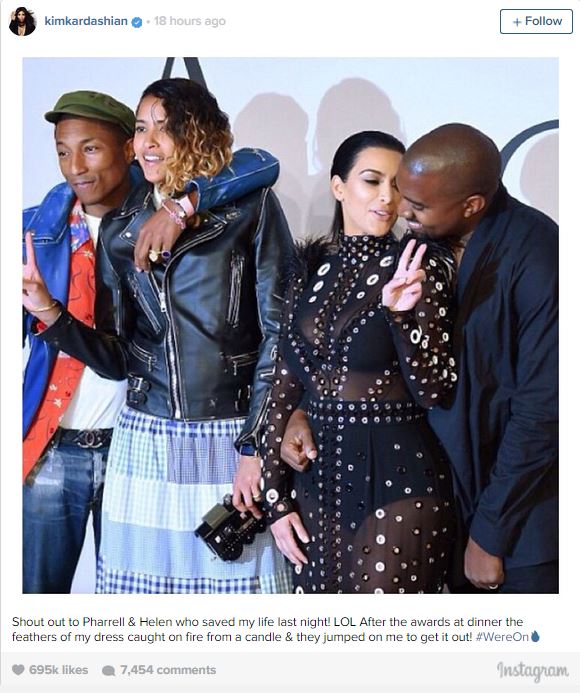 Four teenagers air-lifted to hospital with serious injuries on roller-coaster crash at Alton Towers –
Five people were hospitalised and a further eleven required medical attention yesterday following a crash on an Alton Towers roller-coaster that the theme park described as the worst in its 35-year history. Two men aged 27 and 18 and two women aged 19 and 17, were airlifted to hospital after suffering serious leg injuries and another man aged 20 was treated for neck and abdominal injury before being taken to hospital by land ambulance. A dozen riders were released one at a time over four hours after being stranded 25ft in the air at an angle of 45 degrees when a carriage carrying 16 people crashed into an empty carriage on The Smiler ride, which has a top speed of 50mph. [Daily Telegraph]

Womenswear Designer of the Year: Ashley Olsen and Mary-Kate Olsen for The Row

Swarovski Award for Menswear: Shayne Oliver for Hood by Air

The Media Award in Honor of Eugenia Sheppard: Instagram

The Founder’s Award in Honor of Eleanor Lambert: Millard “Mickey” Drexler, Chief Executive Officer and Chairman of the Board of J.Crew Group, Inc.