‘Star Wars: The Force Awakens’ Crushes Presale Ticket Records –
Fan demand led to crash of multiple websites like Fandango and MovieTickets.com. “Star Wars: The Force Awakens” broke the record for the highest number of first-day presale tickets for Fandango, AMC and IMAX. According to Fandango, the site has sold eight times as many tickets as it did on the first day for the previous record holder, “The Hunger Games” in 2012 — and that’s even before the 24-hour mark was reached. “The Twilight Saga: Eclipse” in 2010 slipped to third place in first-day advance sales. Traffic on Fandango surged to seven times the site’s typical peak levels, a site spokesperson reported. Similarly, MovieTickets.com reported that the online ticketer saw traffic “three times higher than the highest peak in the company’s 15 plus year history.” Comparably, the advance ticket sales for “The Force Awakens” are already four times greater than advance tickets sold for “Star Wars Episode III: Revenge of the Sith.” [The Wrap] See Video of the Day

Fed-up cafe bans money from underwear –
In this tough economic climate, small business owners need every dollar they can get their hands on. Unless said dollar comes from a customer’s undies, apparently. Staff at a Carnarvon cafe were so fed up with patrons paying with money retrieved from undergarments they put the attached sign at the cash register for a six-week period. Fascine Coffee Lounge owner Robin Weeks said the straw that broke the camel’s back was a man who tried to pay his bill with money from his jocks. “My son thought people shouldn’t put money there and he shouldn’t have to touch it,” Weeks said. “We had four or five people that did it. A lot of women think their bra is the best place for their money because they don’t have pockets.” Weeks said while most people approved of the sign, there were some who refused to change their ways. [Western Australian] 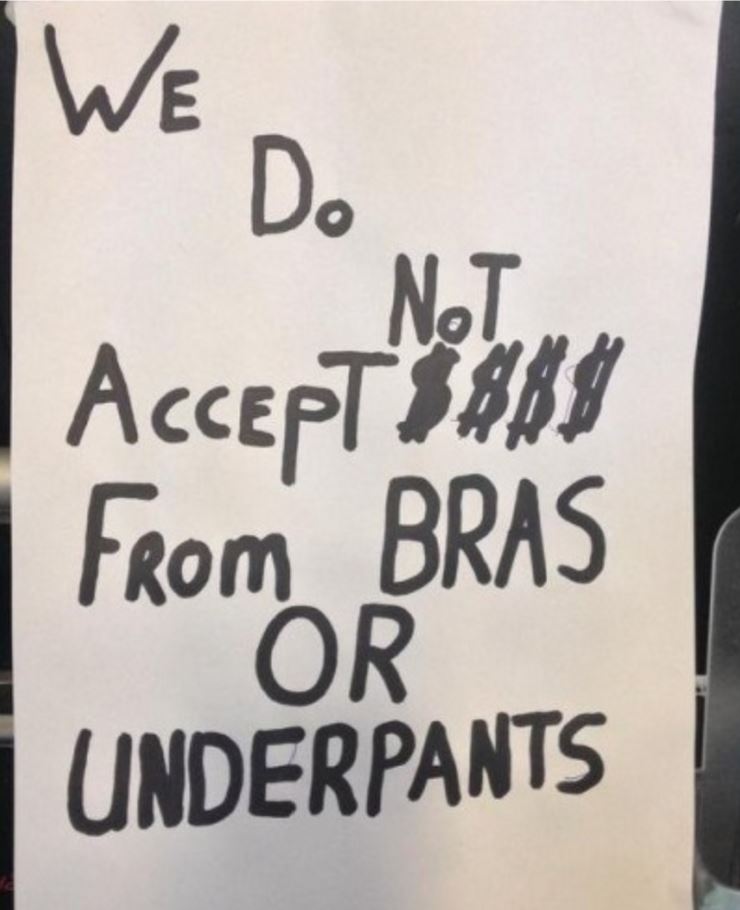